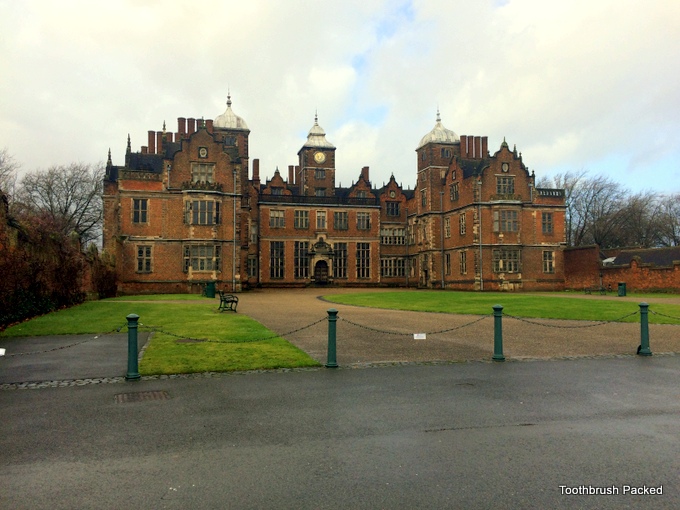 Birmingham is a relatively young city and that is why only a stone’s throw from the city centre, in an inner city area, you can find a enormous Jacobean mansion that was built with countryside views.  There’s no countryside left now apart from the park in which the hall still stands and from Aston Hall you are only a few minutes walk from another famous Birmingham landmark: Villa Park. It does take a bit of a leap of the imagination to imagine yourself back in the days when Birmingham was really a very small place, but the enthusiasm of the guides and outstanding architecture soon help you on your way.

Jacobean architecture is all about symmetry.  If you look at the picture of the facade ((at the top), you’ll notice that the windows, turrets, and all the detailing appears on both sides of the facade.  In fact, it goes further than that because there’s a false door to maintain the look and some of the windows don’t form a useful purpose, but they are there to make the design work.

We visited on a winter’s day and booked ourselves (on arrival) onto the next guided tour.  There is a charge for the tour, but entry to the park and gardens is free of charge. The tour lasted about an hour and a half.  On a practical level you need to know that the hall is cold inside in January and probably for a lot of the year – no central heating after all, so don’t leave your coat in the car.  On a practical note our satnav directed us to the pedestrian only entrance to the park by King Edward’s Aston School and we decided to park here and walk in (only a couple of minutes walk, but perhaps not the best area judging by the quantity of those little gas canisters on the ground). You would be better entering the grounds near Villa Park if you want to be able to drive up close to the hall.

Much of the furniture from the hall was sold off when the Holte family, who built and owned it, fell on hard times.  Over the years it’s been replaced by other furniture of similar age. Looking up at Aston Hall is very rewarding as there are many beautiful plasterwork ceilings.  It’s clear that this was the house of a wealthy and important man and it was a house that King Charles I visited.  The hall was involved with the civil war between the royalists and the parliamentarians and some of the damage remains as a sort of badge of honour. 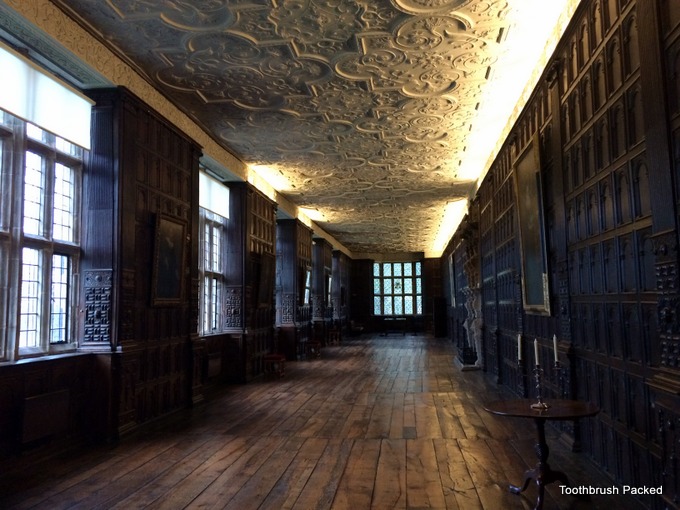 The most spectacular room of all is the long gallery.  At the time it was built it was the longest long gallery in the country and in fact, it was extended to regain its record when someone broke that record, so it could regain its longest status. In the past it was used to provide a space for exercise on bad weather days and there’s evidence that badminton used to be played there.

In the former stables there’s a cafe and shop, plus toilets.  There isn’t a huge range of food available in the cafe and there are only sandwiches, cakes and other snacks available.  On the day we weent they were missing a sandwich delivery (although I didn’t understand why someone hadn’t popped out to the local supermarket), so sandwiches weren’t available, so we filled up on a lunch of crisps, tea cakes, scones and cakes.  The cake was very nice though. It’s not too pricey in terms of entrance fees and the cafe isn’t expensive either as Aston Hall is owned by the council. You can buy an annual ticket which lets you into Birmingham City Council’s other historic properties for a year.

Previous Post: « Fire Angel Giveaway
Next Post: Things To Do On The Isles of Scilly With The Kids »