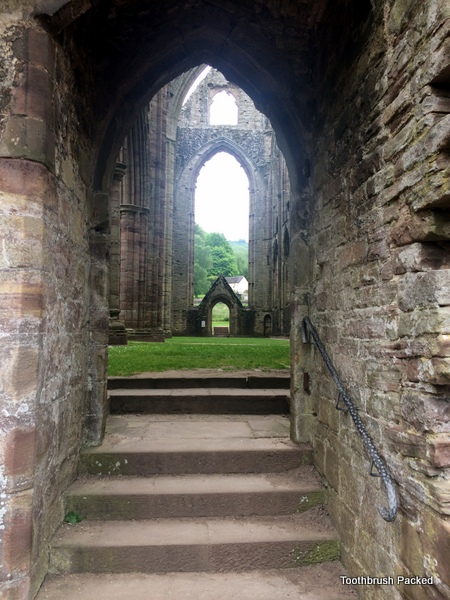 I’ve visited any number of ruined abbey sites up and down the country over the years.  Tintern Abbey is a great one to visit for many reasons, not least the fact it is reasonably well preserved, in fact it’s the best preserved medieval abbey in Wales.  There are still a lot of walls and remains there to see which makes it much easier to understand how the abbey complex would have fitted together and the monks would have functioned as a community.

Set in an area of outstanding beauty, the Wye Valley, the mellow beauty of the stones complements the beautiful wooded landscape.

Tintern was only the second Cistercian foundation in Britain, and the first in Wales. The present-day remains are a mixture of building works covering a 400-year period between 1131 and 1536 (when the abbey was surrendered to Henry VIII’s officials).  During the 13th century the abbey was more or less completely rebuilt, starting in about 1220 with the cloisters and domestic ranges around them, and finishing with the great church.  Most of what you see today is from this later rebuilding rather than the original abbey complex.

There are lots of interpretation boards as you walk around and a guide book is available at a charge from the gift shop.  I don’t feel you need a guide book to understand the site because of the boards , but I’ve visited a lot of abbey sites and I’m a history enthusiast. The day we visited there was an actor portraying a monk and he can tell you more about the abbey too.

For me the standout area of the whole site is the ruined abbey church.  You can see the outlines of the old windows, with their delicate tracery, and the elegant lines of the columns.  The church has a simple cruciform plan, with an aisled nave, transepts each with two chapels, and a square-ended aisled chancel.  It must have been quite something in its heyday.  It’s also easy to imagine the cloisters and the chapter house as both these areas of the abbey are well preserved enough to get a real feel for the lives of the monks.

Practical points: There is a car park and an overflow car park (both chargeable) a little further away. Most visitors drive to Tintern Abbey although cycle racks are provided. There are toilets (including disabled)and a gift shop.  There isn’t a cafe, but there is a pub nearby.  There are gravelled paths and grassy areas – the site is fairly flat.  My father who suffers from arthritis (but isn’t wheelchair bound) was able to access all areas without a lot of difficulty.  There are also some benches that he found useful.  I’d say that you could easily spend about an hour here wandering around and finding out about the abbey.  It’s a beautiful spot to spend time particularly on a sunny summer’s day. The site is managed by CADW and you can get free entry if you are a CADW member and there are reciprocal arrangements with English Heritage and Historic Scotland.