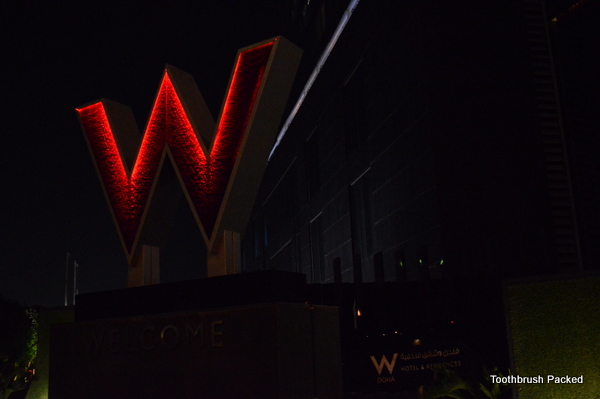 We arrived at the W Hotel Doha in the middle of the night.  It was something silly like 3am and we were exhausted.  Great then that the hotel staff were very efficient on arrival.  Our bags were out of the taxi before we were and very nearly into the hotel ahead of us.  Everything gets scanned on its way into the hotel by the security staff and there were lots of staff around considering the lateness of the hour.  We were quikly checked in and the porter explained how everything worked to us, from the lifts to items in the room.

We had a Spectacular Room (that’s the name of the class of room), but despite the name our room was the smallest and cheapest W Hotel Doha offer.  That’s not to say it was either small or cheap, but I wanted you to understand that this is the minimum offering at the W Hotel Doha. As we were so tired, we quickly went to sleep in comfortable, generous double feather bed. The whole sleeping experience is very comfortable with 400-thread-count sheets, a plush goose-down comforter and the fluffy pillows.

The room design featured lots of circles and this gave it a gentle, relaxed feel.  There was a lot of attention to the little details with thoughtful touches like bath robes and slippers being provided.  There was plenty of technology too with

I also liked that there were USB socket points as well as normal British-style 3 pin sockets.  The wi-fi in the room was good and we had no problems using the internet in the room or elsewhere in the hotel.  I would say though that only 3 devices were covered by the code we were given when we checked in.  Between the two of us we had more than 3 devices capable of accessing the internet and I could see this being a problem for a family if they were staying.

Also provided were plenty of bottled water and supplies were replenished during our stay.  There’s a coffee machine and a kettle for tea.  The only milk provided is evaporated milk though, so you’d best like your milk black or sweet.  Additionally there were a small number of herbal tea bags, as well as sugar.

In the evening a turn down service was provided, but it’s not as extensive as at some hotels as there are no chocolates provided and there’s no elaborate towel art.

Breakfast is served on an extensive buffet basis.  There is plenty of choice and you can order individual dishes for an extra charge. Bear in mind this is a muslim country, so a western cooked breakfast will include things like chicken sausage and beef bacon.  Whilst there’s a reason these meat dishes are usually made of pork, these alternatives are pleasant enough.    The staff get to know the guests quickly and remember their order.  The first day I was served the most insipid tea, which I asked to have changed (it was and the next day I got the right strength of tea without needing to ask).

The pool is very nice albeit small.  In fact, there are two pools next to each other: one is a a single length for serious swimmers and the other is a small pool for others.  Neither is very big.  Given that this is mostly a business orientated hotel, that seemed fine and very few people were using the pool at any one time.  There’s a shaded area for those who want to stay out of the sun and a full sun terrace for those that don’t. They provide towels and/or bath robes to use at the pool and bottled water is also provided.  There are changing rooms by the pool, but they are very dimly lit.

Another point to note is that people are allowed to smoke in the lobby.  We found this slightly odd as we have got so used to smoking being banned in public areas like hotels.

We really enjoyed our stay in the W Hotel Doha.  The standard of accommodation was very high, plus there was certainly a good level of service from the staff.