A truly American day out is to go see a ball game.  Baseball is obviously a big deal in the states and is quite a social occasion too.  A good way to see a ball game though is to catch a Spring Training match in Florida early in the year.  This gives you a chance to see a game at low cost before the season gets going and you can see teams play each other that would rarely compete against each other normally.

If baseball is new to you or it’s a while since you last saw a game, I’d recommend reading up a little on the rules and how the scoring works before you go because it can be a bit difficult to follow if you haven’t watched a match before. I’d recommend booking in advance – we booked a few days before and were able to secure our seats. 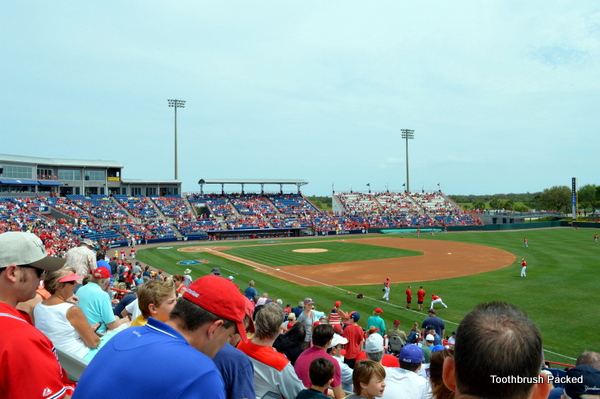 Fans from both teams are mixed in together, which is nice and makes it much more of a family experience I think than when you have the opposing fans separated. Seating is bench seating, which can cause a few problems if people are a little selfish, but can be quite nice for families sitting together.  We had a problem with a couple of ‘gentlemen’ who wouldn’t move up to where they were supposed to be causing things to be a little cramped.

Obviously, it’s traditional to have a hot dog and a beer while you watch.  There are regular breaks in play, which is nice so not everyone is clamouring for food and drink at the same time, which means that there aren’t massive queues for food and drink.  Watch out for any high flying balls coming up from the pitch – if you catch it you get to keep it.